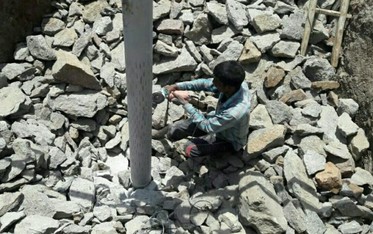 ​Ground water has emerged as the major source of irrigation water for small farmers in India in recent decades. As per the 4th Minor Irrigation Census 2006-07, 19.76 m wells in India contribute to a gross irrigated area of 55.4 m ha. 53% of these wells are bore wells or tube wells that are tapping ground water from shallow (or) deeper aquifers. Drying up of bore wells or reduction in the yield due to failure of monsoon, lowering of water table and over-extraction of ground water is a serious problem farmers are facing, particularly with the wells in the hard-rock aquifers of south India. Repeated drilling of new wells only resulted in in further loss of investments and distress to farmers as most of them fail to tap ground water. Millions of dry bore wells are abandoned without precautionary capping, resulting many accidental falling of children in the wells.

The team of WLF developed and is promoting an innovative and low-cost method of recharging the dry bore wells since 2012.

Following are the some of the instances where it was successfully implemented by respective farmers on their own, during recent years:

1. 25 farmers belonging to a farmers’ cooperative in Katkoor village, Bheemadevarapalli mandal, Karimnagar district, Telangana State adopted this method with partial financial assistance from NABARD Regional Office, Telangana during May-June 2016. With augmented recharge of rainwater to these bore wells, farmers could expand the area under cultivation during Kharif 2016 and opted to grow vegetables. The farmers’ cooperatives is making efforts to collectively market the vegetables. The DDM, NABARD was instrumental in this successful pilot in the district. District Collector, Smt. Neetu Kumari Prasad visited these locations and appreciated the initiative. (Contact: Sri Ravi Babu, DDM, NABARD, Karimnagar – Mob: 9959190125).

Further, the then Mandal Parishad Development Officer (MPDO), Vemulawada mandal, Karimnagar district motivated 10 farmers in Achannapalli and Chekkapalli villages to construct the bore well recharge structures to their low-yielding wells during May 2016. Farmers are happy with increased yield from their wells. 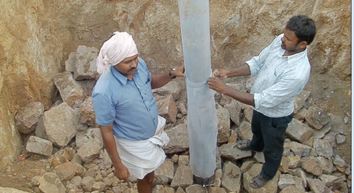 2. Pavan Reddy Challa, a progressive farmer of Chellampalle village, Talakondapalli mandal, Mahabubnagar Dt., Telangana State constructed bore well recharge system to two of his low-yielding wells during April 2016. With better rain water utilization, soil moisture conservation and augmented bore well yield, he could resume cultivation of field crops, vegetables and mango trees in his entire 6 acres of land. (Contact: Pawan Reddy – 9848470909).
​
3. Srinivasa Reddy, a farmer from Yerragondapalem Village, Prakasam Dt., Andhra Pradesh State cultivating Pomegranate garden as well as field crop like Chilly in his 20 acres of farm land. But, reduced yield from two of his bore wells left him worried about his garden. He is a progressive farmer always willing to experiment in his farm. He experimented with applying Jeevamrutham, an organic fertilizer for plant nutrition, to the crops using his drip system for saving water and for optimum crop yields. (Contact: Srinivasa Reddy – 9866571083) 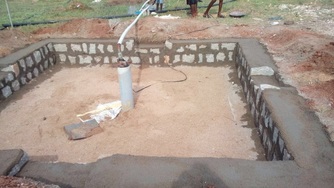 ​4​. Narender Govindu, a teacher by profession and a farmer by passion lives in Australia. But, he pursued agriculture in his native village Appareddipalli in Madugula mandal, Mahabubnagar Dt., Telangana State. Drying up of his two bore wells encouraged him to search for innovative solutions.  He implemented this artificial recharge method to his two bore wells and already harvested the rains of Aug-Sept 2016. Using the augmented water in the wells, he plans to cultivate marigold flowers, teak plants and mango garden in coming season. (Contact: Narender – 9963934541).

​Many other farmers got motivated and followed these progressive farmers in both Andhra Pradesh and Telangana States. Many farmers approach us every week for guidance on implementing it. Realizing the benefits of such innovative technology, recently in Aug 2016, Anantapur district included bore well recharge systems under NREGS.